The 2016 edition of the Business Advantage Worldwide CAD Trends survey has been released, and product data management is forecast for strong growth in the next 12 months and remains a high priority technology among engineering-driven companies.

The annual survey gathers data from more than 600 managers and other leaders at engineering-driven companies, evenly split between the Americas, Europe/Middle East/Africa and Asia/Pacific. 78% of respondents are in small or medium sized businesses.

The survey says only 28% of engineering firms surveyed are now using PDM. But when asked about buying plans in the following months and years, PDM installations are projected to rise by 21% in 12 months and 39% within 3-5 years. (See chart below, republished courtesy of Business Advantage).

PDM rates as one of the most-desired technologies year after year on the Business Advantage surveys. This year it is the third most important trend, with Awareness of PDM increasing year-over-year from 47% to 51%. Usage stalled among polled users, at 28% in 2015 compared with 2014, but the predicted growth more than makes up for the slower uptake in 2015.

Business Advantage maps all 15 technologies to match usage to importance, to get a four-quadrant view of Niche, Trailing, Emerging, and Leading Technologies. PDM is one of only four technologies to fall in the Leading quadrant, along with 3D modeling, 2D drafting, and Simulation. (See chart below, republished courtesy of Business Advantage). 3D printing is the only technology to break into the Emerging category. 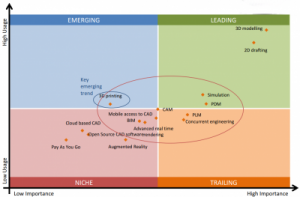 Synergis Software develops document management and workflow solutions that enable you to effectively leverage business and design content across the enterprise to drive growth, mitigate risk and gain competitive advantage. We help you find, manage, share and control documents and related information throughout their lifecycle, securing your critical information assets and automating your business processes.